The appeal of this space was not in how it was arranged, but rather the materials and elements used to create it.

For the shop, the exhibition and customer service desks were constructed from wooden pallets stacked with a glass top. The pallets were separate elements, that were returned to their previous origins once the forum was closed, completing the circuit of use – repair – recycle.

The pallets were used in this case as shop counters, but can be used for an almost infinite amount of other purposes, as they are an item that is unique in its non-specialized design. They are not likely to end up as waste debris in the future, because of their multi-functionality.

The energy put into building these counters and the shop atmosphere was essentially 0, and the recycling was 100%.

In addition to desks, there was a pallet wall including a window facade; this façade was made of glass or acrylic, and although transparent, it was airtight. This is noteable when compared with the rest of the pallet wall, which was made of wood that has been constantly drilled, and can therefore never be airtight as a wall. The facade solved this problem.

The Information Point was designated by a dividing wall made of stacked metal drums. The drums worked well as a wall, but had more features in general, like storage. Once the event was finished, the Forum continued to use the drums in other ways. So again, the energy cost to make the Information Point was 0, and the materials were recycled.

The drums were blue, the color officially recognized as that of information points. The drums were also painted with a white “i”, for “information”. The white letters were painted on site, using a template previously created. 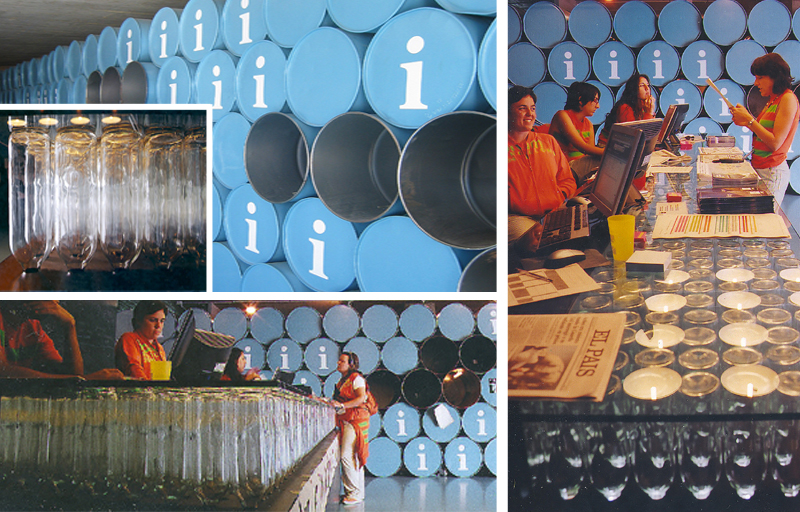