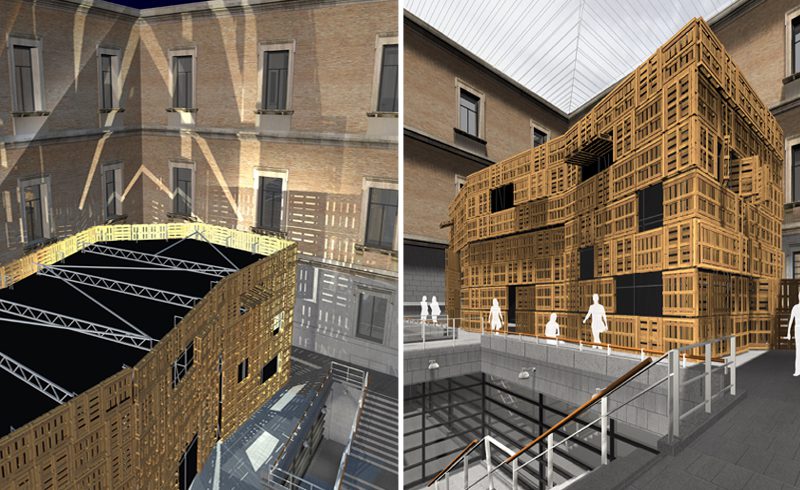 The project had two main objectives: to cover the patio to avoid rain and excessive sun, and to quickly provide a space and appropriate atmosphere for the celebration of four centuries since the publication of Don Quixote by Miguel de Cervantes.

The project was planned considering reasonable cost and sustainability, and because it was a temporary, 6 month structure, the goal was to create a minimum amount of leftover debris so the patio could very easily be returned to its previous state.

When visitors access the patio through the exhibit room, they find themselves in an atmophere that causes sensations and mental images of life in seventeenth century Spain.

On the patio is a structure of scaffolding and fireproof wooden pallets, which define an INTERIOR and an EXTERIOR, but both still within the granite walls of the library.

The wood contrasts with the granite; this opposition of materials reinforces the temporariness of the project against the permanence of the stone building, and also creates a duality of warm / cold, hard / soft.

The scaffolding structure supports the pallets but is not hidden from view, evoking the essence of old theatrical sketches where they interpreted works of authors like Cervantes or Shakespeare – of “behind the scenes” spaces … areas built with wood and ropes, and having a rustic smell …

Seventeenth century Spain was a time of great mechanical ingenuity, lending to the ever infinite imagination of Don Quixote. The project reflects this “surprise trojan horse” imaginitive feeling.

The thickness of the scaffold structure was 50cm. It housed air conditioning installations, so that the enclosure did not suffer in the heat of the summer. The wall was built with a layer of natural cork, so that the rest of the Library was not affected thermally or acoustically. 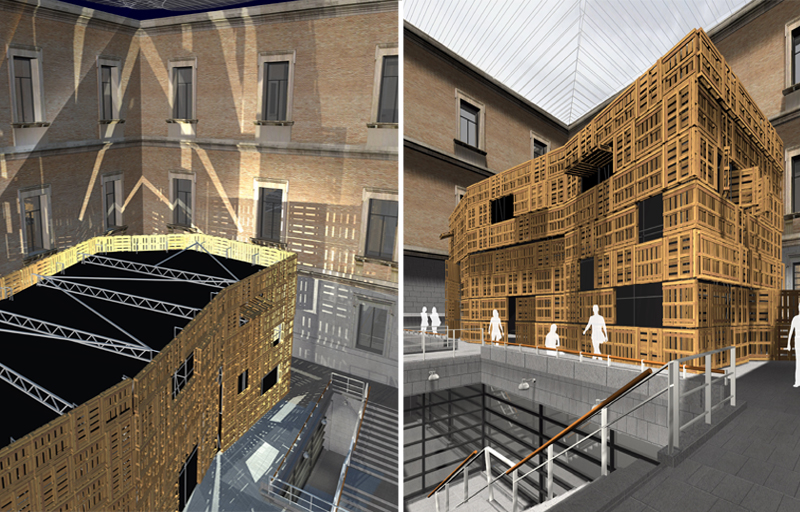